A downloadable game for Windows

You have 30 seconds to find your way out of the haunted dungeon. Find a key to unlock the exit and collect batteries to buy more time.

Once you're out of time, the Phantom will find you and steal your soul.

YES! The ke- oh no. Good work - and thanks for not completely shredding my soul, when the "end level" music kicked in I didn't know whether to trust it...

AWESOME. It really feels like a nokia game (the music, input and sprites). It's challenging but not impossible while having a theme that I wouldn't think to see in the Nokia 3310 game jam.

Phantom Nokia 3D, it's really very curious watch a game that emulates the old Nokia phones from early 21th century or even from the late 20th century. The game, despite that haven't sounds, It makes sense that there isn't have when it comes to honoring the first games of the first mobile telephones on the history, and above has the 3D effect, it's given a lot of merit.

P.D: Oh Sorry, If it has sounds, is because I had the volume turned off. 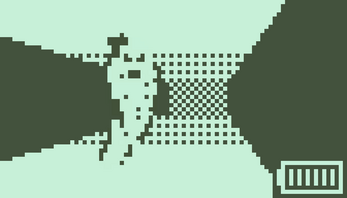